sherrykochmail
Turned Memo++ off for a minute and a big swarm of roaches descended
@memo, why do you like the comments of the most pathetic #CultOfCraig shill? 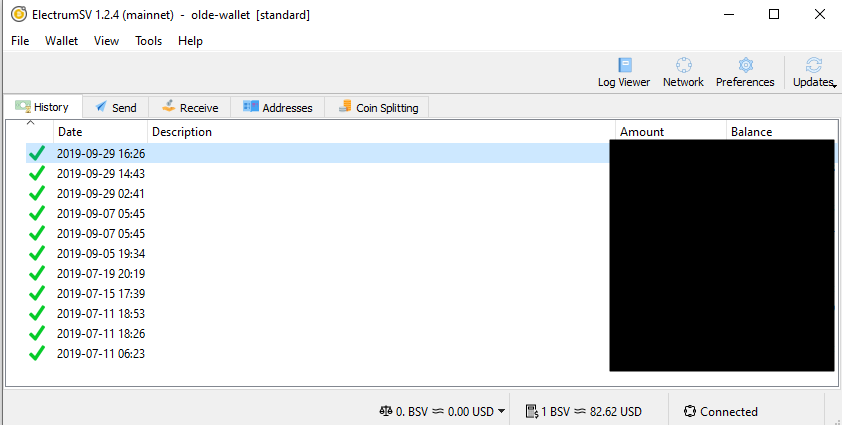 En Fredelig Mand
why are SV supporters always saying that BCH will be proof-of-stake, when noone in the community wants this and never talked about PoS at all? Jimmy is spreading propaganda there.
Bullshit #CultOfCraig propaganda.
1 4 13,546

eye1
Your mind is living in the past. There is no mainnet in data centers. Just a separation of concerns which can be also achieved on bitcoin but with several orders less of complexity.
This what I dislike the most in the authoritarian #CultOfCraig. You would trade decentralization for 100% centralization and corporation control willingly.
2 / 18 1 555

CryptoShoppe
719d · Bitcoin SV
Stop listening to the fake Living Prophet who keeps lying to everyone. Screw the #CultOfCraig Bullshit and the goons that enable him. Get out of #shitversion.
3 7,429

sherrykochmail
He's been successfully undoing his good work for the past 2 months now.
Retards have been undoing his work in my opinion.

First the #CultOfCore that sabotaged BTC and recently the #CultOfCraig which attacked BCH.
1 / 2 3 1,122

TheLegendaryTwatter
868d
I can't believe that it's possible to disconnect from reality as much as the #CultOfCraig and #CultOfCore so I must assume malicious intent and conspiracy to destroy p2p money.
1 2 1,500

CryptoShoppe
Please attack Roger Ver in the comments before he falls for the BSV Bullshit again and keeps shilling Steven Patterson and Magkill. https://www.reddit.com/r/btc/comments/dqzwsh/interesting_bch_vs_bsv_debate/
Roger Ver serious needs a wake up call before he falls into the #CultOfCraig.
1 1

CryptoShoppe
Will not be hanging around with her (Reina) on Twitter after split from BSV: 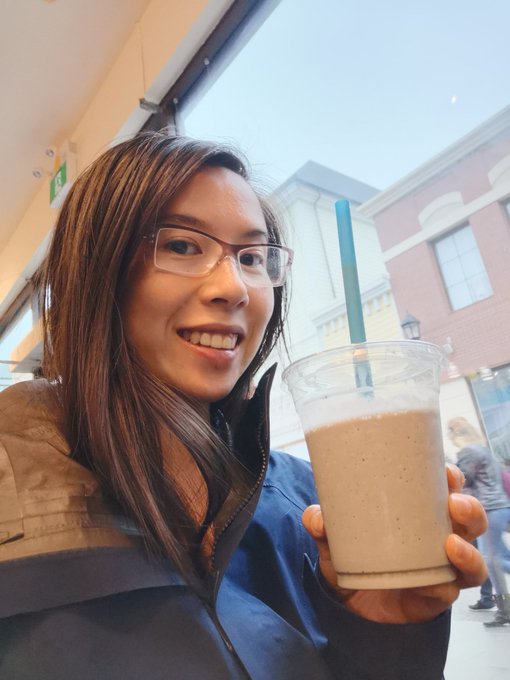 Akane Yokoo and Jajaa are just as attractive and more interesting.
Reina is a fucking idiot. Good to see that you managed to break free from the #CultOfCraig tho. 👍
2 2,600

mungojelly
it was a nice idea trying to have Memo be chain agnostic but in practice it seems to have been even more disruptive how it put the supporters of different chains in the same forum while they're not feeling friendly :/
PSA for the sensitive #CultOfCraig members: turn off "Chain Split Protection" in the menu, then go to memo.sv.
2 / 4 1 567

eye1
Everyone can collect random punchlines from chat rooms and throw them randomly one after another. You never kept two posts on the same topic. Complete waste of time (and blockchain).
Says the #CultOfCraig zealot....
1 / 14

eye1
You better ignore the turd, he sure steers adoption. This is the downside of the platform. It refuses to implement block :(
Thanks for your insight, Mr #CultOfCraig shill. :)
2 1,122

CryptoShoppe
730d
Mining Profitability on BSV, only in the minds of the Craig Shills who believe the #CultOfCraig bullshit. Lie enough to drown out truth so it become true in the alternative reality that lunatics believe.
1 1 4,096

TheLegendaryTwatter
1158d
This might have been the first sighting of a #CultOfCraig member in the wild.... 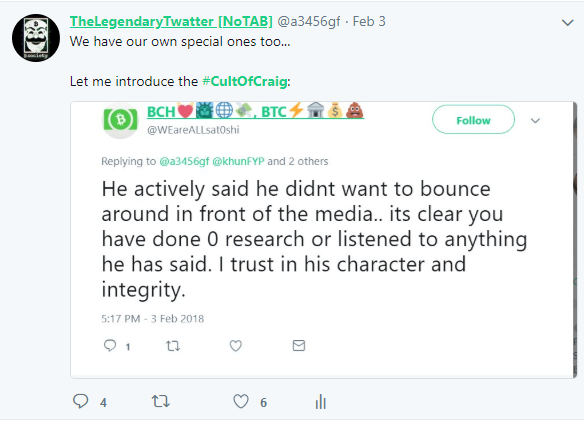 TheBCHBoys
Being able to write full articles onchain... :)
You spell "lowly propaganda" in a weird way.

TheLegendaryTwatter
Retards have been undoing his work in my opinion. First the #CultOfCore that sabotaged BTC and recently the #CultOfCraig which attacked BCH.
I thought #CultofCraig was over when BCH split and the BCH devs started minding their own business?
1 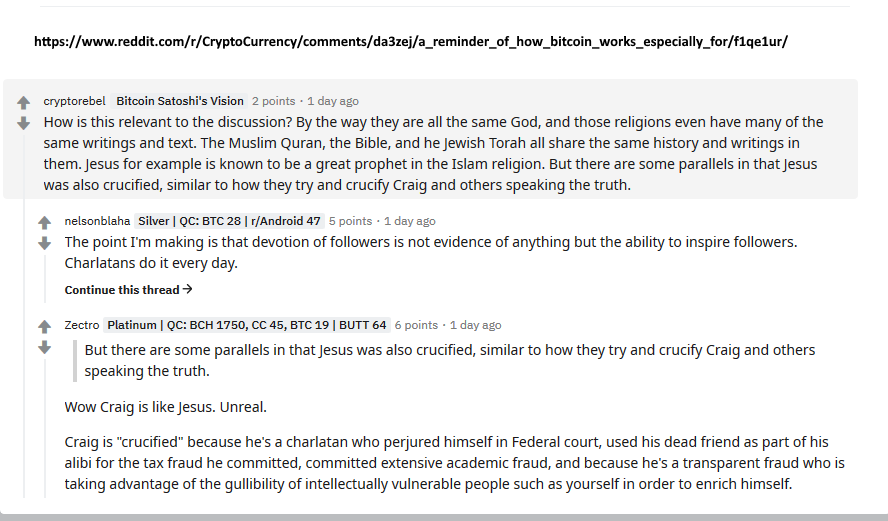 ChainXOR
I am not a BSV fan, but I find the the analogy to Bcore a bit excatterated. Yes, it is clear that nChain et.al. wanted control, but I their vision is very different from core.
The #CultOfCraig and #CultOfCore act the same. They are all liars and heavily rely on propaganda and censorship.
1 10,000

CryptoShoppe
719d · Bitcoin SV
Don't keep trying to weed thru the #CultOfCraig Web of Lies. Maybe it's truth, Craig meant this (insert covering for him). Get out of #shitversion before bags are shit.
1 3,333 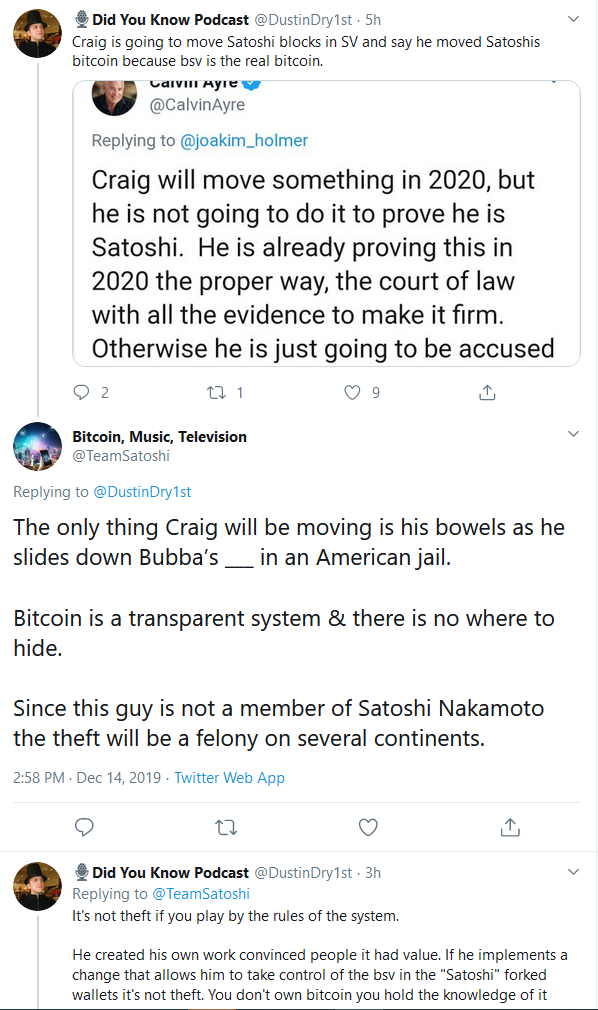 eye1
And a loser to be obsessed with him and suffering from Craig derangement syndrom.
Would be better if this assessment didn't come from a #CultOfCraig zealot.
1