Stop hitting people over the head with facts. BCH people will start to listen once the accumulated POW flippens and BSV is the longer chain. We can only hope that this happens soon.
2 / 14 2

Fnuller15
CSW and Calvin Ayre should have done the same. Why are they picking a destructive fight with BCH when they didn't fight BTC? They could have just forked BTC and rolled it back to v 0.1
Agreed. All this should have happened last August. That being said, I believe that the ABC side made a terrible mistake when they added checkpoints and colluded with exchanges.
2 / 3 1

BitcoinHoarder
Then I can fight harder alongside Satoshi and crush everything
onward ho!
1

reizu
In the case that Memo only supports one chain, which chain do you prefer?
BSV definitely
1

BSV's vision most closely coincides with BU's of free competition, emergent consensus, and no delay in on-chain scaling. . . .
https://bitco.in/forum/threads/buip-107-sell-the-bch-portion-of-bus-funds-for-bsv.23184/

If you still don’t get it, just follow the money 😂
1

The toxic centralization and hate of BTC and BCH has finally been shed.

btcfork
^ this is not a hate post /s
Continually focusing on Craig Wright and insulting him and his followers is trading in hate.

I have proposed a new BUIP for Bitcoin Unlimited -- "This BUIP proposes to sell all BCH coins for BSV."

Craig haters will go broke along with Jihan and the new kings will emerge. Victory will be very sweet
1

Getting rich never felt so good 😋
1 1 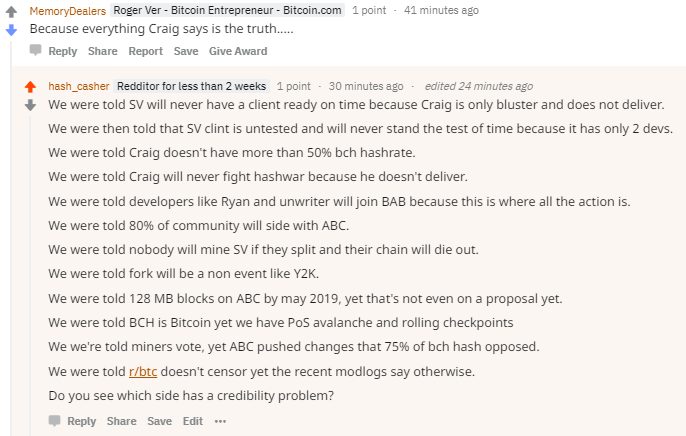 A good example of the hate that pervades the ABC-BCH side.

This is the side that thinks hate is the road to a world currency.

BitcoinHoarder
Yeah. It’s all I have. ABC banned me from r/btc when I said BSV broke transaction record 🤷🏻‍♂️
wow. I thought they never banned people. What happed to free speech?
2

@memo Let's do something about this. Either a different protocol or a way to filter out time stamping.

SuperHacker
At the moment, memo is filled with hash strings created by timestamp service.
@memo Could you provide an setting for users to hide these flooding? i.e. REGular EXpressions. e.g. Hide message = [0-9a-f]{64} && user = timestamp\.network
5 3,289