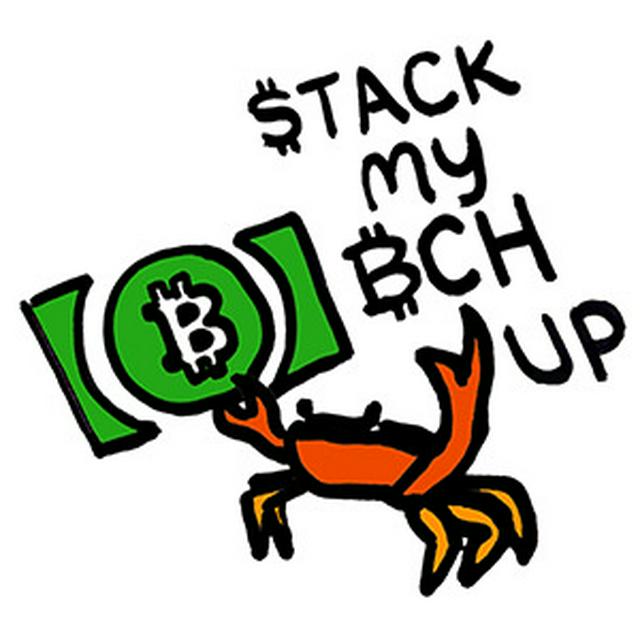 Nikamoto
CSW before the fork : "We want the original Bitcoin peer to peer electronic cash back" CSW after losing the hashbattle and the bchticker : "Let's upload the internet on our chain and build another internet on Bitcoin"
Craig mentions these type of use cases in an interview in 2014😉
1

btcfork
Do you believe that BCH miners are currently acting as responsibly toward the rest of the community as they can? Please reflect on coming Nov upgrades as well as the longer term when answering.
Which miners are you specifically referring too?

Miners do not act as 1,
Bitcoin is designed to incentivise miners to act in their own best interest long term.
2

Wake me up when an Exchange adds support for stash, so I have a place to dump them.

Stash is a parody fork, if they do actually fork, it won't last long as it does not have enough support

BitcoinHoarder
I’m burning too much BCH so I want to make sure every test has enough impact
You are not “burning“ BCH,
BCH is being spent in fees, not burnt.
For mini ST to have any impact, maybe only aim for just a single block, or it will get expensive quick.
1 1

Anders Rytter Acephali #NOTAX
No because the software couldn't keep up and afaik it hit some other artificial limits put in by Core
Bitcoin ABC's tx relay is explicitly rate limited to 7 to 14tx per second.
This was added to core by G. Maxwelle and P. Wuille.
and was overlooked by ABC devs
1 3 1,554

HiFrom_Laura 🌶
Only if they have the Centbee app on their phone also
does it send them a message by sms or email, if they dont have centbee?
1

Sk8eM dUb
I was in disbelief. It was almost like they were trying to make a parody of what SJW Star Trek would be like. Will def check out Orville.
The Orville is a good watch😉

StackmyBCHup
The price of any coin is simply the Last Price Paid. MC is LPP*coins in circulation Only a small portion of bitcoin being traded Determines its fiat price. Utility creates demand, Demand increases price.
The supply remains constant.
12.5 new coins every 10 mins (on average)

This does not change, no matter how many coins you burn

The price of any coin is simply the
Last Price Paid.
MC is LPP*coins in circulation

Only a small portion of bitcoin being traded Determines its fiat price.

Sk8eM dUb
Burning coins will increase the price proportional to the ratio of burned coins to coins in circulation. For a permanent 1% change you need to burn 210,000 BCH.
If I burn 100 coins the price in USD is unaffected, as these coins would not be part of trading market anyway.

All it means is, I hold less bitcoin.
1

anarchovegan
Less supply of coins = more value per coin. Does selling it for nothing trump that?
Supply AND demand,
Determines price.

It doesn't matter what the supply is if there is no demand.

Anders Rytter Acephali #NOTAX
I would rather say that the decline was stronger than the effects of the burning
They always will be.

All it does
Is reduces how many slices of the pie there will be.
This is not the same.
1

ChainXOR
Burning coins causes deflation and hence increases the value of remaining coins.
a BURNT coin, is essentially a coin sold for $0.00

this has no impact on remaining coins.
1 / 5

Anders Rytter Acephali #NOTAX
Maybe because of the conflict, don't you think? I don't think the burning is the reason
i dont think burning affects price in any way, which is exactly my point, people claiming burning increases value of other coins, this is provably false, by the price decline.
1 / 6

Sk8eM dUb
Well they're fourth graders so probably a trophy and maybe some scholarship money. I'll ask them next time I see them.
have you thought about having them make some Bitcoin videos, explaining Bitcoin and how it works and its benefits?

pretty sure such peeps will tip.

Sk8eM dUb
A team of my students won a national(Japanese) computer programming competition. There's all kinds of things you'll want that you don't even know could exist yet. They'll make them.
How much did they win?

Yes I also see programming becoming an unskilled job in future as it gets taught more and advances.
1 / 3

Jared, Sith Lord®
I believe some unskilled jobs will turn into low level curation of the Internet. Thoughts?
Similar to my thought, many jobs we consider today as skilled, will become unskilled jobs, as they will teach it in schools to everyone. eg It development.
1

Sk8eM dUb
There's always going to be unskilled jobs, they'll just be different. Especially if America becomes more wealthy in general, there'll be tons of stuff to do for decent bread.
I think more globally than just America, lots of unskilled jobs will vanish, maybe not all, but a lot. new jobs may replace them but they will need be different to today's jobs.
1 / 3 1

Jkid
I've applied to companies that have remote work but no one was interested. I posted on craigslist with my resume. No one was intertested. #helpJkid #bchforeveryone #saveJkid
With that skillset,
why do you need a job,
use your brain and create.
Work for yourself.

Imo, you are talking bollox, and just taking advantage of kind memoans.
1 / 9

Avoid scamming a-holes on memo,
who do nothing but stick their hand out.
Use your brain when reading their sob stories.
1 666