Donnie Azoff
102d
CMV
If BCH tx fees were as low as Litecoin's it would be easier for cool services like #MEMBER and #MEMO to turn a profit. 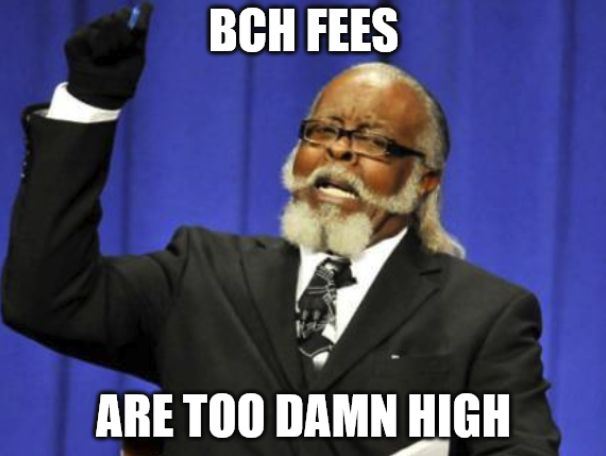 DarkSpace
replied 102d
Fees are literally as low as they can go. 1 sat/byte without a hard fork. It's like a bacteria and a virus, a big difference I guess, but completely irrelevant on the human scale.
3 1,000

DarkSpace
replied 102d
Sure, and it will happen when there is a need for it. So long as we dont repeat BTC's mistakes.
2

Donnie Azoff
replied 102d
How can you say there is no need? Why should we wait for a need to arise? If BCH goes up 10x in price (very likely) fees will be over a penny. This is too high IMO.
1 600

p0oker
replied 102d
So are you willing to write the code or pay for this feature or you are just here bitching about a non issue without contributing anything?
1

p0oker
replied 101d
You are, I don't consider the way you described the issue as just an opinion tho.

ChainXOR
replied 102d
Come on. Not everyone is a dev. Don't be so dismissive towards users. We want more users.
2 1,600

p0oker
replied 101d
There's an attitude in his tone that I don't like. Developers working in BCH are volunteers, they are not getting salary for people to shout at them why things aren't done.
1

ChainXOR
replied 101d
...and by the way, I will personally chip in again. Anyway, a limited 0 sat/byte tx per. block has been discussed at some point, so it is not a totally unfamiliar issue.
3 1,600

ChainXOR
replied 101d
Ok, fair enough, But it is not entirely true that those devs are not getting paid. The reason for the node Flipstarters was to pay devs for work.
3 1,600

p0oker
replied 101d
Paid for a specific roadmap which they are working on. Issues like this should be followed up on technical channels like gitlab or BCHN/BU slack. Otherwise it's just not constructive.

p0oker
replied 100d
This whole thread doesn't make a sense. BCH obviously has very low fees and still someone is here complaining about fees. I don't think it's a legit concern even for the OP

p0oker
replied 97d
I agree it's not sustainable for new users tho, but the problem with BTC is not that fiat price is high, it's that satoshi price is high. If you could pay 1 sat per byte in BTC
1

p0oker
replied 97d
People wouldn't have as much problem with high fees that they have today. It's important to avoid a fee market in the first place.
2 1,024

Dragon-Sided D
replied 96d
BTC's inability to scale means it is just a matter of time before people realize it's crap compared to more modern alternatives. Worst at everything except brand name recognition.
3 5,600

community
replied 100d
just ask yourself. who exactly is collecting these fees? and where do they go to? and who is regulating the amount needed to be considered as fees paid?
1

Nicknameul
replied 101d
I think somebody wanted to pay the Devs for the work they are doing, but that’s none of my business! Unpaid Devs do mediocre jobs!

FreeTrade
replied 101d
I prefer this solution - miner setting could be changed to sats per kilobyte rather than sats per byte.

Its a relatively small code change, but I think all miners would need to act

FreeTrade
replied 101d
| at the same time for homogeneity in the mempool to avoid doublespends. 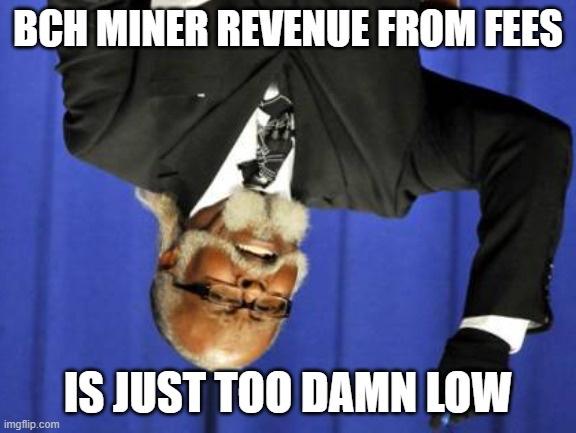 I am more worried about comparatively low overall fee revenue. Current fate of BAB is a grim reminder that miners can and will kill a low hash coin.
2 17,384

ChainXOR
replied 102d
This is because a Litecoin Satoshi is about 1/10th of a BCH Satoshi i USD value.

Both chains have a min. fee of 1 sat/byte.

Donnie Azoff
replied 101d
https://reviews.bitcoinabc.org/T706
Yea, I REALLY like this feature. I hope they're eventually able to do it.
2 600

ChainXOR
replied 101d
The ABC team have forked off BCH, but Mark Lundeberg who made the proposal works for BCHN now, so there is a good chance, if people ask BCHN nicely :-)
3 1,600

The-One-Law_Sanctuary
replied 101d
If they do resurrect this,
it should specify _absolutely_
that only OP_RETURN transactions are acceptable for this feature.
Or, perhaps, only the OP_RETURN component is zero-fee.
1

ChainXOR
replied 101d
Nah...you can just put a cap on how many txs pr. block can be 0 sats. That is how it originally in the Satoshi Bitcoin node.
3 1,600

ChainXOR
replied 101d
You can also make more sofisticated schemes like if a coin has a certain coindays-ago, it should free to move.
2 1,000

Nicknameul
replied 101d
Free transactions were awesome... I doubt we’ll be getting these on BCH with the current leadership... Sad, because it would have been a great + for BCH!
2 600

ChainXOR
replied 102d
| amount of 0 sats/byte txs in a block. Maybe contacting the node devs from BCHN, BU, BCHD etc. and ask if this is something that is still on the table..?
1 600

3D
replied 102d
I'm pretty sure this is a joke and a funny meme but please correct me if I'm wrong.

En Fredelig Mand
replied 102d
are LTC fees really that low? I remember them as being quite similar.

GiggleStick
replied 101d
In comparative fiat value only, not in units of the coin itself.
2 600