SILENTSAM
It is absurd to think people just want to flood into America to claim welfare.
The surest way to know people dont want to go to USA (or any country) for welfare is to get rid of welfare. There are other positive externalities to living in developed coutries tho.
1 / 69 1 1,111

SILENTSAM
replied 606d
Instead of scrapping the system you could have people be qualified for it only if they either grew up there, or worked there for a period of time before hand. It is a good system.

Sk8eM dUb
replied 606d
This is the centrist position and I agree with it. Coincidentally, it's also Trump's position. More/better jobs solves the welfare problem. Immigrants can come if they want to work.
1 1,000

SILENTSAM
replied 605d
Which most do. People even joke about immigrants owning corner stores, but really it just shows the willingness to open a business. Willingness to take risks is a good thing.

e🌱xx🌱tra
replied 606d
I agree this is another option, but I dont like it as much. though it is the more likely to happen option.

SILENTSAM
replied 605d
I think as automation take many of the low skilled job that welfare will become more essential. As jobs get more complicated we have to accept that some people won't be able to work.
1

John_Doe
replied 604d
Automation makes complicated jobs easier. A typist today doesn't need near the skill they needed 100 years ago. Spell check does the work for them for example.
1

SILENTSAM
replied 603d
Yes it does. I am all for automation. I was more speaking about how we should accept some portion of the population not being employable.

John_Doe
replied 603d
The poor will always be with us. Been like that since the dawn of civilization. Stealing from someone to pay to the poor is criminal.
1 680

SILENTSAM
replied 603d
It is hardly theft. The hyperbolic idea that taxation is theft has no merit. It is based on faulty premises.
1

John_Doe
replied 603d
Taking something from someone that belongs to him and giving it to someone else to whom it does not belong is theft.
2 680

SILENTSAM
replied 603d
Which is irrelevant, and does not explain taxation. Taxation is payment for services rendered. You choose to live in a place that benefits from those taxes.

John_Doe
replied 603d
No the majority of people think they can live at the expense of everybody else. They vote for politicians selling them these fairytales.
1 680

SILENTSAM
replied 603d
Both sides end up believing fairy tales. The people you please to get into power are not the same as the people you need to please to stay i power.

John_Doe
replied 602d
No, some people are smart enough to know they won't be able to keep their promises even if they wanted to. Unfortunately these people are in the minority.

Septmike
replied 603d
And separating kids from their parents at the border is Kidnapping.

Septmike
replied 580d
If Child services takes a child it's generally for the safety of the child. That is a hell of a lot different than taking a child from a parent that is seeking Asylum.

SubjectiveReality
replied 580d
Is it? Those parents chose to drag their children across a barren wasteland of a desert with little water and in the company of organized criminals. For what? Selfish creature comfort

Septmike
replied 580d
Boy if that is what you think, you are an ignorant Moron. You should listen to a Real Republican like John Kasich and stop listening to the Trump Trash.

SubjectiveReality
replied 580d
Well that didn't take long to resort to name calling in lieu of making an argument. Children call names. Adults refine and hone reason as a skill to cooperate and solve problems.
2

DarkSpace
replied 580d
The world makes a lot of sense when you realize most people still behave like children.
1 1,111

Septmike
replied 580d
You are right. I should have not said Moron. But you still are ignorant.

SubjectiveReality
replied 580d
Show me how, if you can. Otherwise it is you who are ignorant. Show me what it is that you know that I do not.

yoonski
replied 579d
"Selfish creature comfort." Isn't this what we all want? Eat, drink, and have a place to sleep. Don't judge others for wanting what you want: a bit of security and peace.

SubjectiveReality
replied 579d
Are you suggesting there is no comfort, food, drink, or shelter in Central/South America? Methinks you watch too much tv. Go for a visit, you might be surprised.

yoonski
replied 579d
It's simply that the prices are too high and that there are not enough jobs. They are poor. They realize that even the poor in America eat. They are coming because they are hungry.

SubjectiveReality
replied 579d
And you think there are enough jobs for unskilled, uneducated labor in America? Welfare to those who contribute nothing will break the entire system sooner than later. No, not okay.

Septmike
replied 580d
These people are heading to the U.S border because their kids are being raped and killed if they don't join a gang or a drug ring. They are trying to get a better life.

Gozira
replied 579d
What a load of bollocks! THEY have to fix it. If they don't, they deserve what they got. Those #immigrants turn host countries into shitholes like the ones they are from. #Deport!

bobymicjohn
replied 579d
If I was in charge I'd administer an intelligence on the populous. All the people who fail - like you - would be deported.

Septmike
replied 579d
Then send your ass back from where your family originally came from too. Don't need shitholes like you in the U.S

TrashPosterInTheDark
replied 579d
So you agree that there are shithole cultures?

Septmike
replied 579d
Immigrants come to the U.S for a better life. It's always been that way. Your azz doesn't get to decided who gets to stay. If you are singling out any group of people = racist

Septmike
replied 579d
No there are individual shitholes like you that are racists, bullies, and Bigots.

SubjectiveReality
replied 579d
Where is your evidence to support that claim? I don't believe it. I've lived in various parts of South America. Tens of millions live there and have for generations. How?

yoonski
replied 579d
War on drugs * . Honduras is a key US "ally" in the region and tacitly approved of military coup and regime as long as the war continues. The democratic process was destroyed.

yoonski
replied 579d
US war on terror: "Since 2009, the US has invested nearly $114m in security assistance to establish elite military and police u... as part of Hernández’s crackdown on gangs."

orrslaw
replied 579d
So your saying that the US actually caused this problem & are systematically imposing propaganda to demonize the victims of its actions? SHOCKING! SURELY THEYVE NEVER DONE THIS BEFORE!
1

yoonski
replied 579d
Empire building, amirite? Any EU4 player worth the salt would realize that the US of A needs a war. The US needs to punch a lot of gold out of some place, or disband a lot of troops.

yoonski
replied 579d
My parents have experienced life under a military dictatorship supported / accepted / encouraged by the United States. This is a common experience for many people around the world.

Sk8eM dUb
replied 603d
The question is almost never an either/or(as the Hegelian crazies would have you believe), it's a question of how bad the problem is, where to draw the line and who's going to pay.

SILENTSAM
replied 603d
There was once a time when almost everyone had to be involved in food production for everyone to eat. Now it is less than 1% of the people. Today almost everyone creates wealth...

SILENTSAM
replied 603d
Mostly a machines job. Agriculture will not go back to employing a lot of people as if would make food too expensive to buy.

Sk8eM dUb
replied 603d
Could be more people though. America's(subsidized) addiction to mass produced corn and wheat products is not sustainable long term. Even the beef eat corn, it's awful.

SILENTSAM
replied 603d
The US is very protectionist over agriculture, but most nations are. Agriculture is the last thing to globalise. Nations still want food security is globalism breaks down.

Sk8eM dUb
replied 605d
I don't imagine a future where we only eat McDonald's and shop at IKEA. I want hand made stuff. It's higher quality. I want to be entertained when I eat out, not served by a robot.

SILENTSAM
replied 604d
I want the robot myself. McDonalds and IKEA are good example of low skill labour. Where does one work when there is no demand for low skill labour? Not everyone has to work.

Sk8eM dUb
replied 604d
You should come visit Japan. One of the most automated places on earth. Also among the lowest unemployment rate on earth. Maybe I'll do a walk-through video of Tokyo station for you.

SubjectiveReality
replied 580d
Japan is also an ethno-state, isn't it?

Sk8eM dUb
replied 580d
Here's one of the most interesting videos I've ever seen. The techniques to Balkanize/weaken first world countries are all the same!

Sk8eM dUb
replied 580d
Yeah Japanese blood will get you automatic citizenship here. It's fascinating how they have almost the exact same identity politics issues as any other developed county though.

SILENTSAM
replied 604d
Oh yeah, I shouldn't imply that automation has to cause unemployment. I just think that if it does we shouldn't require those people to be employed.

Sk8eM dUb
replied 605d
As wealth increases(an enevitalbe result of automation), so will services that only humans can provide. How about non-mass-produced luxury goods? Can robots make gourmet meals?

SILENTSAM
replied 604d
Can low skilled people do high skilled jobs? Do we need everyone to be employed in order to create enough wealth for everyone? With automation I think we won't.

Sk8eM dUb
replied 604d
I'm seeing a world where all wine is made from hand picked grapes. Just because you're not creative enough to imagine a business that utilizes low skilled ppl dsn't mean it cant happen

SILENTSAM
replied 604d
Some low skilled labour may still exist, it there will be less demand for it. Especially in developed nations.

Sk8eM dUb
replied 604d
We must have different definitions of what constitutes a developed nation. Would you like to live in a world where you only buy mass produced crap from vending machines?

SILENTSAM
replied 604d
Like the world we currently live in? Yes. That said I see automation as improving things and lowering prices. Better than having the low skilled people doing it.

e🌱xx🌱tra
replied 605d
This would mean increasing industrialization (more automation) leads to increasing percent of the pop too low skill to work. Wonder if this has been the case? & size of effect?

e🌱xx🌱tra
replied 604d
I guess that's what I'm getting at. these trends dont come from nowhere. we should see evidence of them already. genuinely asking if anyone has studied these trends bc I'm curious.

John_Doe
replied 604d
They have been saying this since the industrial revolution. New jobs are created as old ones disappear. It is based on the notion that there is only so much work to do, which is wrong.
2

e🌱xx🌱tra
replied 602d
If we look at employment to population ratio more people were being employed until ~2000. It’s decreased since then 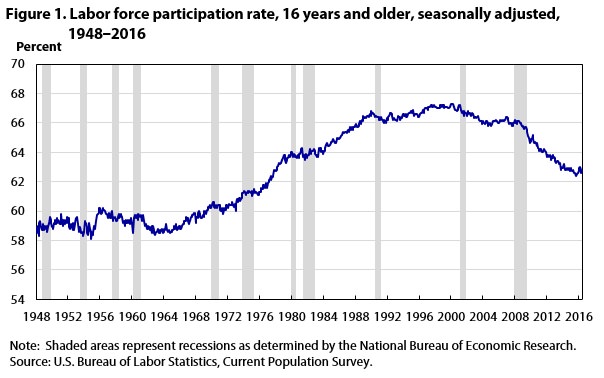 e🌱xx🌱tra
replied 602d
The rise is likely women entering the workforce. Idk about the down turn.
1

e🌱xx🌱tra
replied 602d
If we say unemployment rate is the average number of people who cant work, it’s been nearly constant at 6% for 125 years. 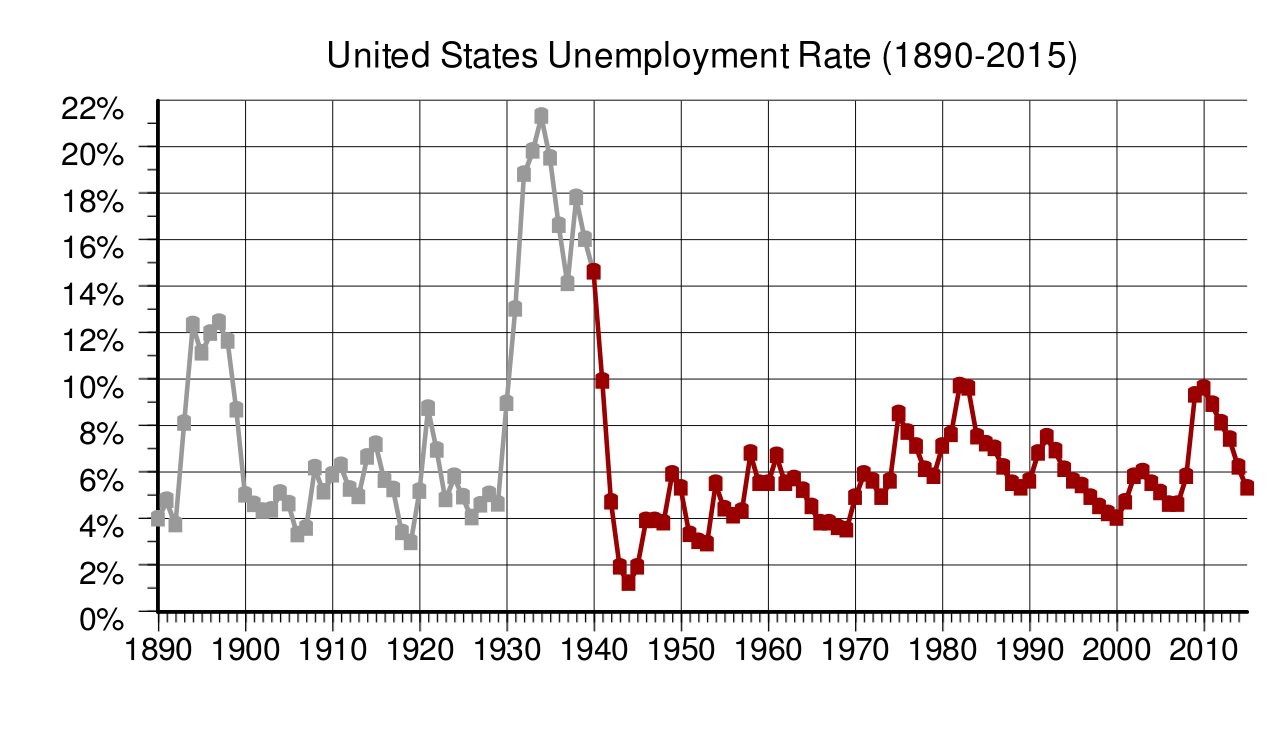